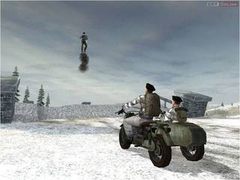 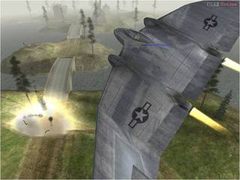 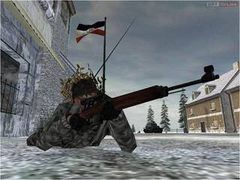 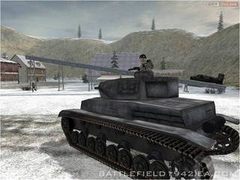 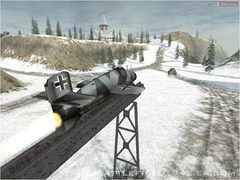 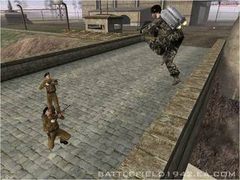 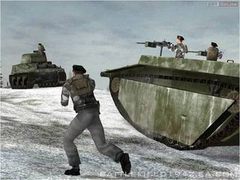 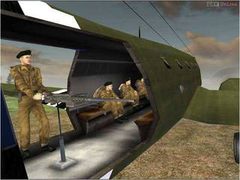 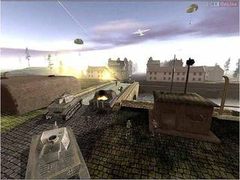 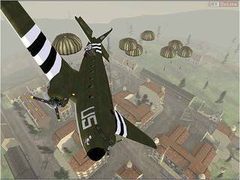 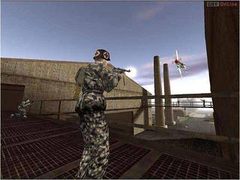 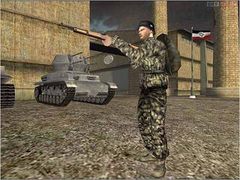 Schwimmwagen
This multi-use vehicle packs a wallop on both land and sea. With a two-person seating capacity and a passenger-side mounted machine gun, the Schwimmwagen has the potential to easily execute amphibious missions and still come out fighting with guns blazing.

Rocket Pack
Fly and fight at the same time--Strap on a prototype rocket pack and you can control the skies. Imagine the look on an Allied soldier’s face when he thinks he has you pinned down, only to see you launch yourself to safety above the battlefield. Then pull out your pistol and send him to the great beyond. You’re a one-man aerial assault unit. The German scientists have outdone themselves with this one.

Natter Rocket Plane
When you go up in a Natter Rocket Plane, don’t expect to come down in one. This single-engine interceptor is expendable--you take off, you unload your unguided rockets on any incoming enemy bombers, then you bail out. Don’t worry, you have a parachute. Like the Goblin, this is a fast, maneuverable airplane, good for flying into the heat of the battle, doing some quick damage, and getting out fast.

Mauser K98 Gren ade Rifle
A grenade launcher attachment for the standard issue Mauser K98 rifle can turn an ordinary German infantryman into a one-man assault force. Just rig up the grenade and let it fly. This option can be a lifesaver when you need to clear out an enemy machine gun nest in a hurry.

Horton HO 229
At first glance this single-seat fighter-bomber looks just like a wing without a tail. Closer inspection reveals a fast, long-range jet armed with a lethal combination of machine guns and unguided missiles--the perfect fighter/ground-attack combination. Don’t let its wooden frame fool you--this is a tough, maneuverable flying machine, and in the hands of a capable German pilot it can do some serious damage.

Harley-Davidson w/ Machine Gun-Mounted Sidecar
This motorcycle does the trick for swift one- or two-person transport over medium distances. Although typically unarmed and unarmored, this Harley-Davidson is equipped with a mounted sidecar and powerful machine gun that lets a seated passenger blast away at the enemy.

F-85 Goblin
The USAAF developed this compact dynamo as an escort for its long-range bombers, which often faced heavy and lethal harassment by the Luftwaffe. Just 21 feet across its wings and less than 15 feet from nose to tail, this is the smallest jet fighter ever produced. Its small profile and quick speed make it a tough target for anti-aircraft fire and other planes. When you want to lay down some strafing fire and getting out in a hurry, the Goblin is your machine.

Gewehr 43
This new model developed during the War is a popular weapon among the German troops, being lighter and easier to reload than its Gewehr 41(W) predecessor. The Gewehr 43 semiautomatic rifle comes standard with a telescopic site, making it ideal for sniper situations.

Flakpanzer
This Axis anti-aircraft vehicle was created by mounting a 37mm anti-aircraft gun on the reliable chassis of the T-38 tank. Effective against planes, light-armored vehicles, and even foot soldiers, the Flakpanzer offers both intensive firepower and the protection of 16mm-thick armored plates.

Fallschirmjager Gewehr 42
This is the assault rifle of choice for German paratroopers. It was developed specifically for the paratroopers to compensate for their lack of supporting weapons during operations. This weapon is said to be the model for the next generation of full-power assault rifles, and for good reason--it packs a powerful punch.

Commando Raft
While not the most impressive vehicle in the Allied force, the Commando Raft is still an effective vehicle for simple shore-to-ship transportation. With a small outboard motor and forward-mounted machine gun, this boat with its payload of well-armed soldiers is the perfect stealthy, amphibious assault craft.

Bren Light Machine Gun
This light machine gun of Czechoslovakian origin is a powerful yet versatile weapon for the British Infantry. Introduced into the British Army in 1937, it is effective in both anti-troop and anti-aircraft roles. This gun is accurate, reliable, and heavy-duty, making it an ideal companion on the battlefield.

Armstrong Whitworth AW-52
This unique Allied plane prototype features bombs and missile-launching capability. With a flight style and capabilities similar to the Axis Horton HO 229, this impressive bomber is the Allied match for the explosive awe of the “Flying Wing.” Climb aboard and learn the feeling of doing 805 mph at sea level. But don’t let the speed go to your head--you still have a mission to accomplish.

Sherman Tank with T-34 Calliope
This mechanical beast offers the best of two worlds: the firepower of the T-34 rocket launcher with the rugged mobility of the M4 Sherman Tank. Unleashing this devastating duo, nicknamed the “Screaming Mimi,” ensures that your target will be well blanketed by a suppressive burst of explosive firepower.

Sturmtiger
The unique pairing of a modified Tiger tank chassis with a mounted naval gun, the Sturmtiger is one of the most powerful armored vehicles in its class. Although limited by a low ammunition capacity, the Sturmtiger is still an incredibly effective weapon, capable of mowing down infantry and reducing enemy vehicles to burning heaps of scrap metal.

T95/T28 Super Heavy Tank with AA Gun
The T28 (redesignated T95) is the heaviest armored vehicle ever to come out of the US Army. Larger and heavier than the average war beast, this mighty tank is well suited for breaching enemy fortresses. With its heavy armor it easily deflects anti-tank weaponry, and the top-mounted machinegun will clear out any enemy infantry who stand in the way.

Throwing Knife
The throwing knife is standard issue for the British Commando. This weapon may be low tech but it’s highly lethal. In the hands of a seasoned Commando, a well-thrown knife can kill an enemy instantly. This knife can be your best friend when you’re in need of stealth or out on the battlefield and low on ammo.

Wassefall Guided Rocket
With Allied forces increasing their air raids on the Fatherland, the Germans need something to bring down enemy bombers. Enter the Wasserfall. This ingenious rocket can be guided by a ground operator with a radio unit, steering by line-of-sight. This advancement in anti-aircraft technology could turn the tide of the war.