No problem zawsze do usług :))

NOTE: Changing your registry keys can lead to system or OS problems. Only change registry values if you know what you are doing or have a registry backup.

Edit your registry and find key:

Right click and create the following new Strings and set each with a value of '1' for Enabled, '0' for disabled:

NOTE: Cheats will only work after a new level is loaded (loading savegame does NOT count). Some people have reported problems with the LOAD function, so you should use the main menu for LOAD purposes.

Level Select
Create a string value called "DoLevelSelect" and set the value to '1'.

Now, create 19 string values titled "LevelSelect#" where the number sign "#" is replaced with the numbers 1 through 19. Each of those string values will be assigned a value that corresponds with each level. To get these values, open the Game folder and go to data\levels. Put the name of each file (do not include the '.dll") you see there as the value for each of the LevelSelect# entries.

Note: This procedure involves editing a registry value; do not attempt this
if you are not familiar with working with your system registry, as a mistake
can cause serious problems with Windows. Start Regedit and use the
"Registry/Export Registry File" menu option to create a backup copy of your
original registry. Go to the following entry:

HKEY_LOCAL_MACHINE/Software/Computer Artworks/TheThing/1.0
Create a string value by selecting "Edit/New/String Value" menu option.
Name it one of the following "String Value" names and press [Enter]. Right
click on the "String Value" name entry that you just created, click "Modify"
then type 1 at the "Value Data" field and press [Enter] to activate that code.
Note: Replace 1 with a 0 to disable an activated code. Exit and save the modified
registry. Note: Cheats will work after a new level is loaded -- loading a saved
game will not activate them.

Enable game saves:
------------------
Note: This procedure involves editing a registry value; do not attempt this
if you are not familiar with working with your system registry, as a mistake
can cause serious problems with Windows. Start Regedit and use the
"Registry/Export Registry File" menu option to create a backup copy of your
original registry. Go to the following entry:
HKEY_LOCAL_MACHINE/Software/Computer Artworks/TheThing/1.0
Create a string value by selecting "Edit/New/String Value" menu option.
Name it DoInGameLoadSave and press [Enter]. Right click on the "DoInGameLoadSave"
entry, click "Modify" then type 1 at the "Value Data" field and press [Enter].
Exit and save the modified registry. "Load Game" and "Save Game" selections will
now appear in the options menu when you press [Esc] during game play. Note: Do not
use "Load Game" option in that menu, as it does not work properly (go back to the
main menu instead); however the save option works as expected. The saved game name
will be called "TestGameName".

Hidden trailer:
---------------
Wait about one minute at the main menu to view a longer, uncut television trailer for the game.

Hint: Persuade a person:
------------------------
When someone's trust is in the orange and they will not do anything for you, enter
first person mode and aim the gun at their head for three seconds. They will now do
things for you without good trust.

Hint: Get Whitley to follow you:
--------------------------------
The following trick requires Stun Grenades (found in the back of the room with Boss 3),
Blood Test Kit (found in the same room), and the Grenade Launcher (in the save room
down the hall from Boss 3). Starting after third Boss fight (hanging tentacle monster),
backtrack your way out of the weapons lab, back up the air vent, and to the "mine"
elevator. As soon as you reach the surface, strafe left, and equip both the Grenade
Launcher and Stun Grenades. If you step forward at all, it triggers an intermission
sequence you have to die and start the level over. Enter first person mode and aim up
the corridor, parallel with the bottom of the last metal wall panel. Launch a grenade
and quickly walk forward. The intermission sequence will trigger, but Whitley will
stand still instead of running off. Now, quickly run ahead of him (preferably block
his path to slow him down) and use the Blood Test Kit. He now trusts you enough to
follow orders. Order him to follow you (otherwise he wal!ks around the corner triggering
guards to attack) and give him a weapon. You have now backup. He only lasts a brief
amount of time, and will disappear roughly halfway up the snow corridor, which appears
scripted. However, every bit of backup firepower helps in that spot.

Hint: Skip first Boss battle:
-----------------------------
When you encounter the first Thing Boss, hold Up/Left to run diagonally and you should
run under it before it can hit you. This will also aim you directly at the junction box.
Immediately start fixing it. As soon as it is almost fixed, hold Right to run through the
door. Since he will still keep fixing it as long as you do not release the button, with
luck it will be fixed before the Boss attacks for the third time. At the intermission
sequence you tend to take off in a random direction, so this may take a few attempts --
save immediately before trying this. If successfully completed, you will lose only about
half a bar of health and no ammunition, making the next area much easier.

Hint: Defeating the second big Thing:
-------------------------------------
Go into to his garage. Fix the electrical panel that operates the hoist. Step back towards
the middle of the big door. There is an opening between two of the crates. Using your
grenade launcher in first person targeting, send in a grenade. If the Thing turns its
head toward you, then you have him targeted. Continue sending in grenades until he begins
to burn. You can send in a few more if desired for extra fun. Run into the Thing's room
and on the far wall from the big door is a switch. Throw the switch and watch as the Thing
dies. You will probably take one hit from him.

Hint: Shutting doors:
---------------------
Always shut the door of the room you walk into, if you have the chance. For example,
on the level where you have to kill all the walkers, a walker will enter from the
front door if you do not shut it.

Hint: Shutting doors:
---------------------
Always shut the door of the room you walk into, if you have the chance. For example,
on the level where you have to kill all the walkers, a walker will enter from the front
door if you do not shut it.

Hint: Keeping your team together:
---------------------------------
Listen to your team. They will tell you how they feel. If you hear someone say something
similar to "We're gonna die", check the team menu and see how he is doing. If there is
an X across his face while he is shaking uncontrollably, bring out the Tazer and shock
him. Wait for him to calm down, move out of the area, and give him back his gun. He might
be bitter, but after you kill a few more things he will be fine. Otherwise, he might start
shooting you and your team, ending with himself in the head.

Hint: Being watchful:
---------------------
Pay very close attention to your team. If you see someone doing odd things, such as
not shooting at enemies when they appear, or moving rather far away from you when
your walking, be on alert as this could be a sign of infection. However, do not waste
a Blood Test Kit on him to see if you are correct. Just be on alert because they could
mutate at any second. This also goes for you as well -- if your team sees you doing
the same things, they will question your trust and may attack you.

Hint: Medi-Packs:
-----------------
Always try to keep medics alive because medical packs can be few and far between.
If you want your medic to heal a member of the team, tell your team to stay, then
push your medic into the wounded team member. If he is hurt enough, the medic will
heal him.

Hint: Saving ammunition:
------------------------
Try not to give all your team members the same weapon because your ammo will go
quickly. A good combination is you with a Shotgun or Machine gun, your second man
with the one you are not using, then a Pistol. The rest depends on your ammunition
supply.

As per Computer Artworks:

Run "regedit" and go to:

create a string value called "DoInGameLoadSave" and set it to 1.

Load Game and Save Game now appear in the options menu.

Note:
-----
Don't use Load as it doesn't always work properly (go back to
the main menu instead), but Save should be fine, except you
don't get a save-point icon and the game will be called
"TestGameName". 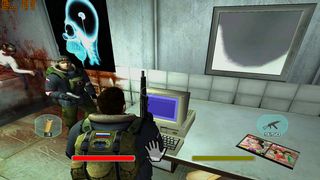