a gdzie to kupić ?

Grimrock 2 Update 2.1.17
November 11, 2014|No Comments
The second patch for Legend of Grimrock 2 is now out! The patch will update the game to version 2.1.17 and fixes several issues and also extends modding capabilities.
Steam version: the game should automatically update soon. If the game does not update in a few hours, restarting the Steam client should help.

GOG version: The patch also works with GOG installations but there is a slight kink. When a dialog appears saying that an existing installation can not be found and the patcher asks “Abort Installation?”, select No. You have to then navigate to the installation location of your GOG version of Legend of Grimrock 2.

We have sent the patched version to GOG and Humble Store and it will take some for them to process and make the new version available through their channels.

Here are the full release notes:

Jak kogoś kręcą takie klimaty w stylu "Eye of the Beholder" i "Might and Magic", to niech obczai grę The Quest. 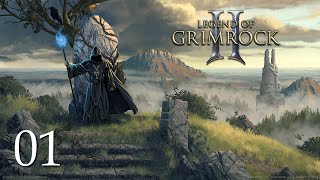